If you inspect most automotive forums, you’ll notice that most of the problems car owners face have something to do with car keys. In the past, losing your car keys was not a big deal, as you only had to get a replacement from your local locksmith. Today, modern vehicles have introduced an additional layer of anti-theft protection that comes in the form of a transponder chip. Following this automotive upgrade, any car owner will be left wondering how to start my car without a chip key.

You see, even if your car key doesn’t have any remote lock feature, it has a transponder chip inserted deep inside the key. These types of keys are called by many names such as transponder keys, key FOBs, and chip keys. Just as we’ve mentioned earlier, these chips were introduced by auto manufacturers as a way of adding an extra layer of protection.

Now, the chips in your transponder keys serve one specific purpose of emitting Radio Frequency Identification (RFID). So, once the key is inserted into the ignition, the chip inside the key sends alpha-numeric code to the car’s computer instructing it to start the car.

Starting My Car without a Chip Key: Step-by-Step Guide

So, as it stands, starting your car without your original transponder key is next to impossible. However, following in-depth research, we’ve noticed that there are two ways you can actually start your car without the chip key.

The first method is by consulting your local dealership to have them reprogram the FOB key and create a replacement. The second method is actually what we’ll be discussing in this guide, which is fitting a transponder chip on a fresh key and trying to start the vehicle. We’ll also discuss how to reprogram a new key to create a spare key in case of an emergency.

Before we get far, we would like to clear the air by explaining the difference between transponder and non transponder keys. By understanding the main differences, it will be easier for you to determine the type of key your car uses.

Before the invention of the transponder car key, starting the car was as simple as touching two wires together in a process known as “hot wiring”. Since car theft was a major issue at the time, General Motors introduced a more sophisticated car lock system that came in the form of the transponder key.

Invented in 1985, a transponder car key resembles a traditional key with a metallic blade and specific cut shapes that fit inside the ignition. The only difference with this type of car key is that it has a tiny chip inside the key head.

The purpose of this chip is to emit coded radio signals to an antenna ring inside the car’s immobilizer. The immobilizer then confirms the coded signal and sends the feedback to the car’s onboard computer for it to start the car.

So, in short, the serial number that’s set in your transponder key must match with the one programmed in your car for the engine to start.

The opposite of a transponder car key is a non-transponder key. These types of car keys have double cuts on both sides to make them unique. Although this can prevent thieves from starting the ignition, the level of security offered by these keys is minimal.

The reason for this is simply because these car keys aren’t equipped with a transponder chip. So, in case someone replicates the original key, then they can easily start the ignition and potentially steal your car. Now, to those that are hearing this for the first time, you might be tempted to think of upgrading your non-transponder car key to a transponder key.

Well, this is not possible. In fact, the inverse is also impossible. These two technologies can’t be combined. If you upgrade to a transponder car key, your car won’t start because it doesn’t have an in-built immobilizer system. If you downgrade to a traditional chipless car key, the car won’t start either as there’s no transponder chip to send any codes to the immobilizer.

Which Situations Might Force You to Start Your Car Without the Keys?

Just before we begin, I think it’s wise if we can discuss some factors that might force you to start your car without the keys. Previously, we’ve discussed how car manufacturers have employed sophisticated technologies that prevent you from starting a car without the original key.

In case the ignition switch is faulty, then it means the ignition timing will not be perfect. As a result, electricity will not flow perfectly through the system meaning your car will not start when turned on.

How Do You Start a Car Without Chip Key?

We’ve discussed two major situations that can force you to start your car without the keys. The most challenging part is that most modern vehicles have transponder chips that have strict security features that can’t be bypassed easily. Therefore, starting such vehicles without the original keys is next to impossible. Thankfully, this guide has a simple method you can try. Here are the steps.

Can You Start a Keyless Car Without the Keys? 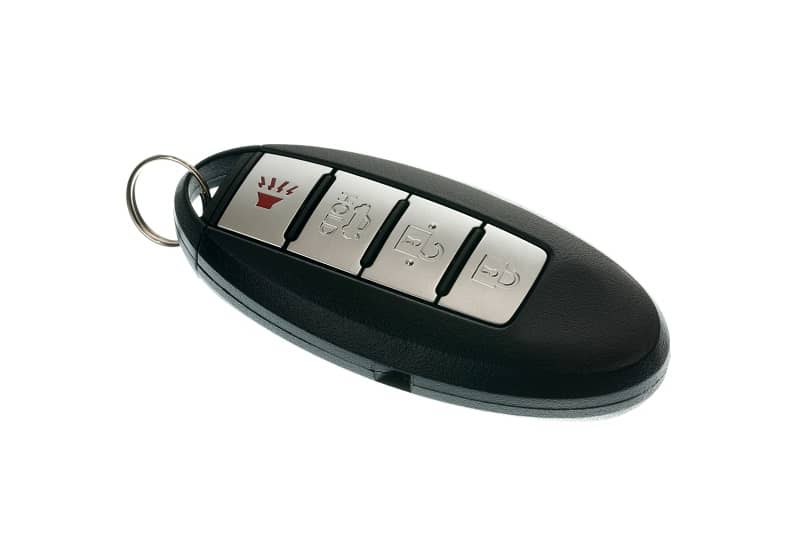 To those with modern vehicles with smart keyless fobs, one major challenge you’re likely to face is the smart key battery dying unexpectedly. Since this can be frustrating, let’s learn how to bypass the ignition switch to start the car without the key fob.

In case of such eventualities, smart keys are equipped with mechanical keys that can be used for emergencies. To access the physical key, all you need is to remove the cover on one side of the fob to access the L-shaped metal key.

With this key, you can open the doors and start the engine just like a traditional key. This will serve as a temporary option before you replace the batteries.

How Do You Reprogram a Transponder Key?

Now that you’re aware of how to start a car without a chip key, this last section will discuss how to reprogram a backup key if you already have the original key with you. Now, during your research, you’ll find most people talking about programming a transponder key without the original.

You see, programming a fresh transponder key without the original is quite difficult. Unless you have an advanced transponder key bypass kit, bypassing the RFID security feature is very challenging. Otherwise, if this were an easy process, then the transponder key anti-theft feature would pose a huge risk to most vehicles.

So, with that said, let’s list some steps you can follow to reprogram a fresh key with the original.

Once the process is over, remove the key and reinsert it again. Turn the ignition on to test whether the process was successful.

Q1. Can You Bypass the Immobilizer?

Yes, you can. However, it’s not recommended as it will leave your car defenseless and vulnerable to theft and vandalism. To bypass the immobilizer, you can follow these simple steps.

Yes. Transponder car keys are very secure when used in your car. With traditional car keys, bypassing the ignition key to start the vehicle is very easy. Here, criminals can use various methods such as compromising the ignition switch to start the car with a screwdriver head or hotwiring.

But, with the modern transponder car keys, these keys have special chips that produce unique digital IDs. These IDs must match the serial number on the onboard computer to start the engine.

It’s very simple. First, you can consult the car’s manual, and secondly, you can try to remove the top cover of the key to see whether it has a chip. The chip can come in the form of a black square or a transparent tube.

But, other than the chip key, we’ve discussed other things such as programming a transponder key with the original, starting a keyless car without the smart key, and bypassing the immobilizer.

And, with that said, we believe that you’ve learned something new regarding transponder chips. In case you have any doubts, it’s recommended that you consult an expert or your local dealership for more information on how to program your transponder car key.